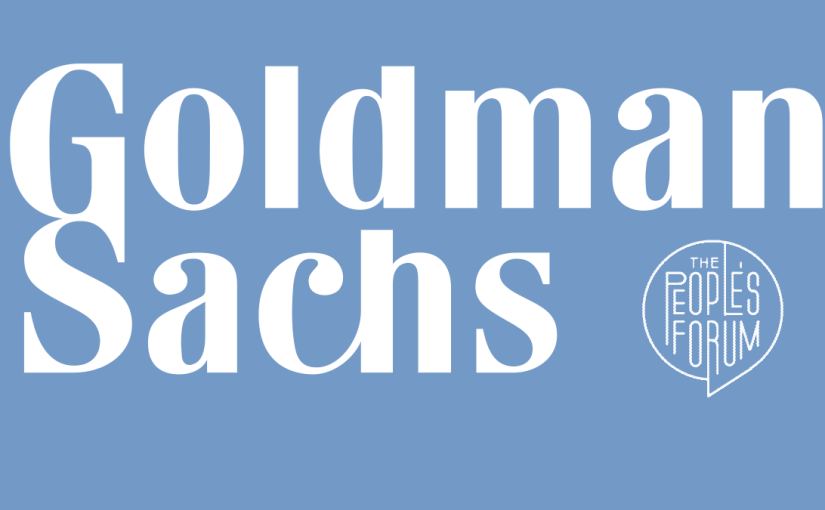 Update 1/18/22: Newsline magazine confirmed all of the substantive findings of the post below and found that many of the entities we mentioned have significant investments in Israeli companies and/or companies complicit in Israel’s occupation of the Palestinians in stark violation of the boycott, divestment, and sanction (BDS) campaign.

Using Cause IQ’s database of non-profit organizations, Twitter users discovered that in 2019 Goldman Sachs Philanthropy Fund (GSPF; EIN: 31-1774905) funneled over $12 million to the People’s Forum, over $12 million to Vijay Prashad’s think-tank The Tricontinenal LTD (EIN: 82-2882135), $210,000 to Codepink, and $20,000 to AIPAC (the Association for Investment in Popular Action Committees [a pro-Assad lobbying group] not to be confused with the American Israel Public Affairs Committee which has the same acronym).

Based on this information one might conclude that Wall Street’s most reviled investment bank is funding certain leftist projects, but the reality is more complicated.

GSPF is a donor-advised fund, which means donors send their money to GSPF and that GSPF, in turn, sends the donation to the non-profit of the donor’s choice. These donations are both tax-deductible and anonymous. GSPF vets and approves each non-profit and once the donor hands over the money, the donor loses control over it which means GSPF approved and wrote checks to People’s Forum, Tricontintental, Codepink, and AIPAC at the behest of unknown third parties.

This arrangement raises both obvious questions—who is funding these organizations, why, where is the money going—and less obvious questions, like why was GSPF chosen to launder these donations instead of a ostensibly left, liberal, or progressive donor-advised funds like Tides or the Jewish Communal Fund?

Barring a repeat of GSPF’s 2018 leaks, definitively identifying the donors is virtually impossible. However, clues about who might be funding these particular institutions and what their political agenda is are buried across the annual 990 disclosure forms that these organizations file with the Internal Revenue Service to keep their non-profit status under the U.S. tax code.

The third most important aspect about People’s Forum GSPF funding is not only does it constitute the majority of their funding but there is a strange series of overlapping 501c3 and 501c4 organizations funding one another and GSPF is overwhelmingly where most of the money in this incestuous web originates from (see chart below): 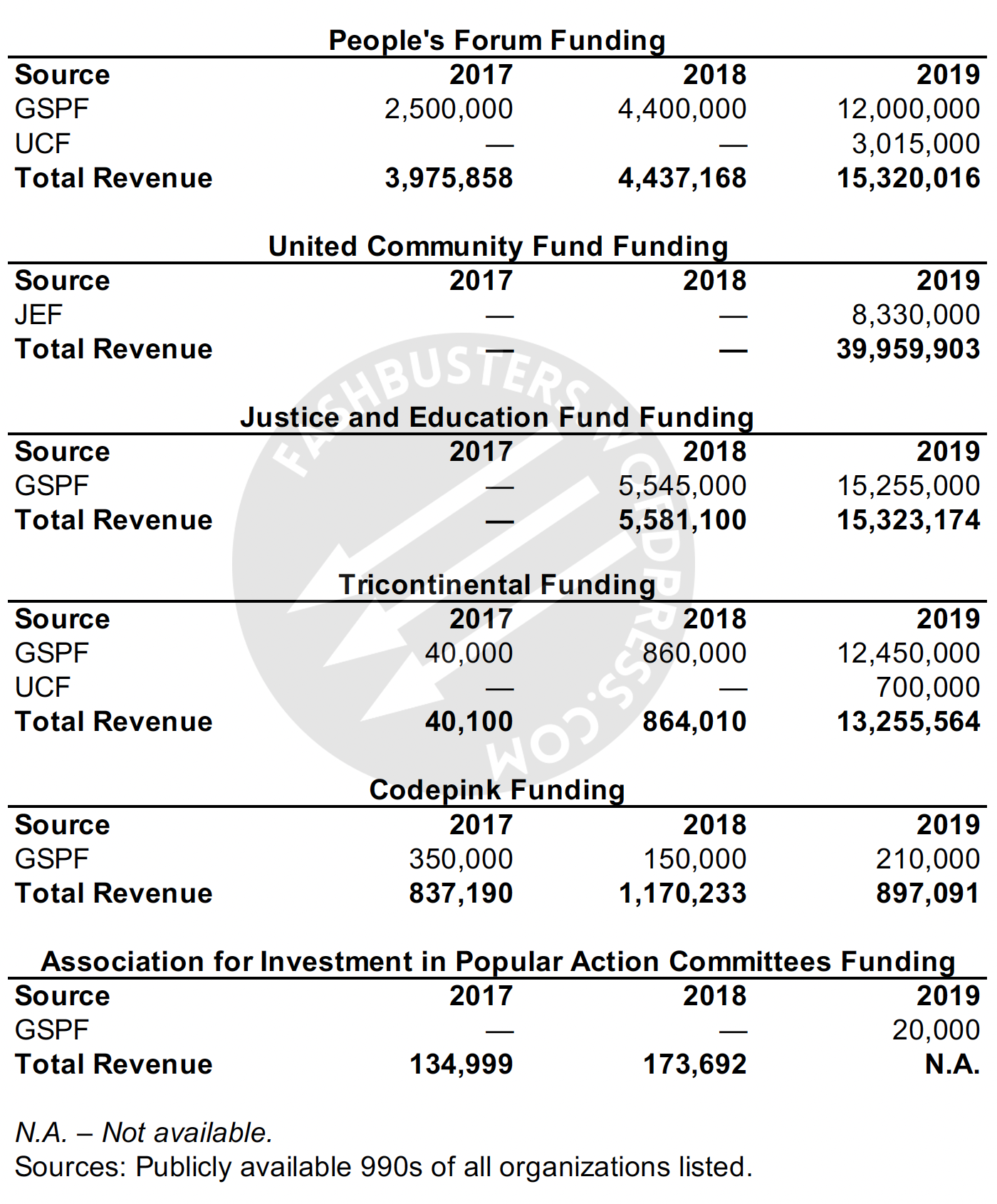 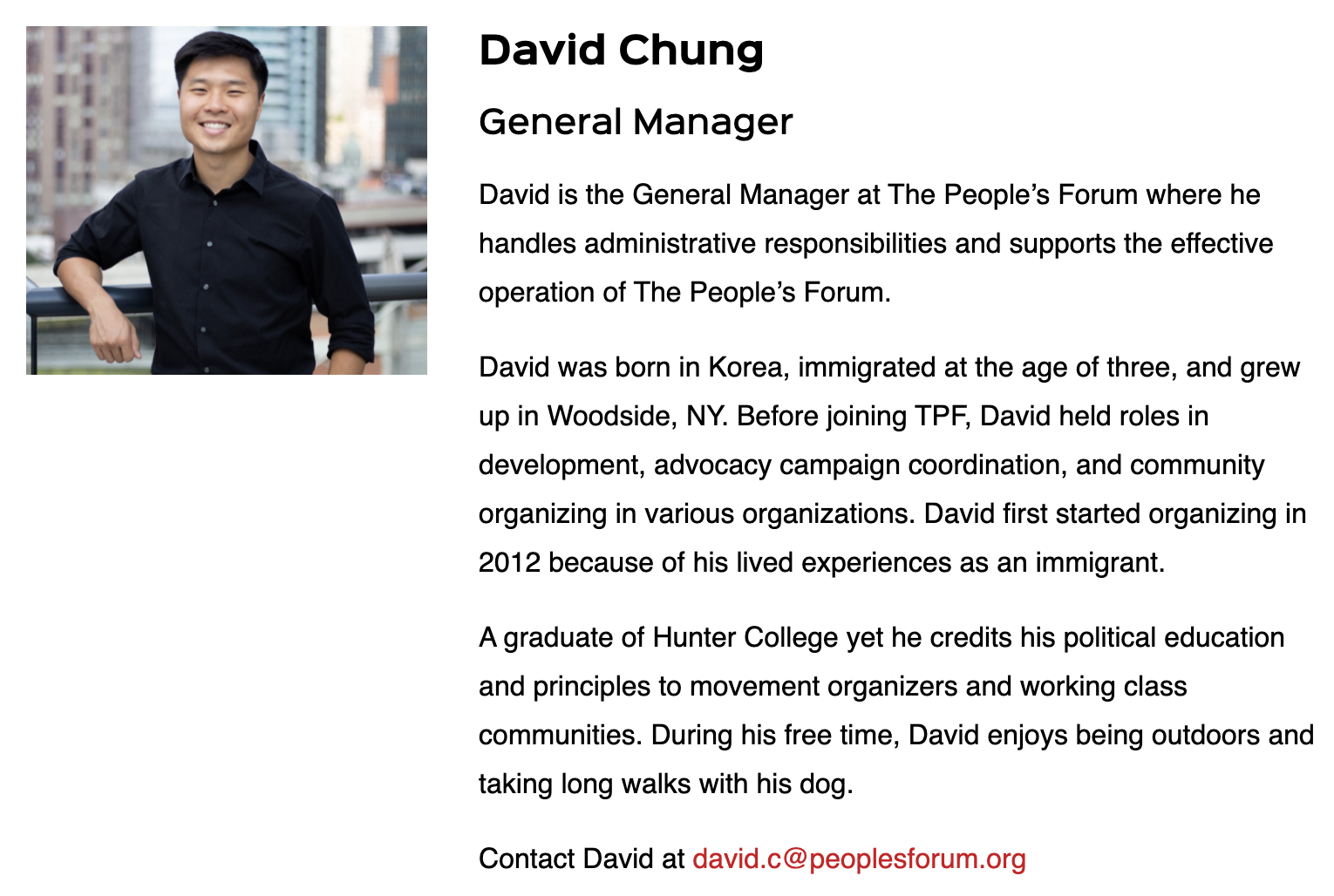 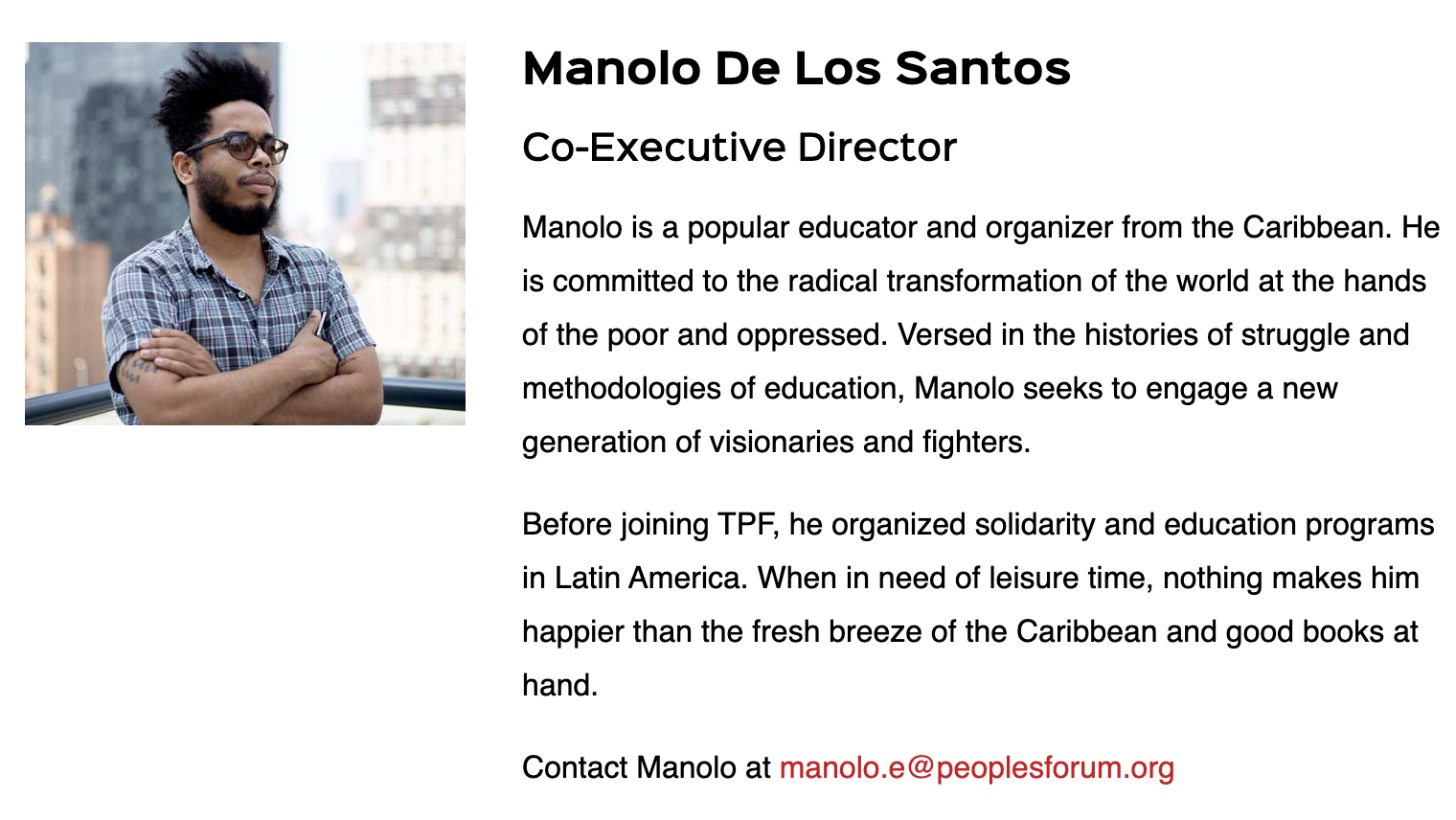 The confusing tangle of relationships between People’s Forum, GSPF, JEF, and UCF becomes even more complicated when their myriad connections to Vijay Prashad’s think-tank Tricontinental LTD are factored in.

It appears that Renata Porto Bugni and Tings Chak used their positions as board members of UCF to direct funding to Tricontinental where they also hold positions just as David Sung Mo Chung and Manolo De Los Santos funded People’s Forum by using their positions at JEF albeit without the third-party intermediary, UCF.

An interesting question is what Tricontinental spent their $12 million GSPF donation on because in 2019 their expenses only amounted to $148,677 in salaries and wages and they do not have a massive, expensive storefront/office to pay rent on like People’s Forum. $141,900 of that $148,677 was paid to an entity based in New Delhi, India called “Tricontinental Research Services LTD” for “research, analysis, and translation services.” Perhaps Tricontinental’s 990s for 2020 and 2021 will reveal where the $12 million was ultimately spent.

Another fact worth noting is Vijay Prashad’s unexplained lurch from being critical of the Chinese government’s repression of Marxist students and Uyghurs in 2018 to whitewashing the latter a few years later as GSPF dark money donations to Tricontinental began to surge. And his ‘evolution’ have something to do with Prashad becoming a fellow at the Chongyang Institute for Financial Studies at Renmin University of China in 2020?

Unlike Tricontinental, JEF, UCF, and People’s Forum, GSPF does not appear to have an ongoing relationship with the Association for Investment in Popular Action Committees since only a single $20,000 donation was recorded in 2019. The only remarkable thing about the $20,000 GSPF gave to AIPAC in 2019 is that this amount is exactly what AIPAC paid Max Blumenthal in 2018. Whether this is a coincidence or not is unclear.

While Codepink (formally, Codepink Women for Peace; EIN: 26-2823386) did receive GSPF funding throughout the same time period as People’s Forum, there is no similarity in either the donation patterns or overlap with associated 501c3s and 501c4s. And according to the group’s 2020 990, Codepink is effectively out of business with neither donations nor spending of any kind.

The same cannot be said of People’s Forum which received Paycheck Protection Act loans from the federal government in 2020 and 2021.

Once word got out about People’s Forum and Tricontinental each receiving $12 million GSPF donations in 2019, Assistant Professor of Sociology at the University of North Carolina guessed that the ultimate source of the money would turn out to be tech capitalist Neville Roy Singham:

The surprising thing about this blind guess is that there is circumstantial evidence in the 990s of the aforementioned organizations that make Singham a compelling suspect as the source of GSFP largesse that keeps the lights on at the People’s Forum’s expensive Manhattan storefront. Consider the following:

Could all of the above be coincidences? Yes. But how likely is it that a former employee of Singham just happens to run a 501c4 (UCF) that got a massive GSPF donation in 2018 and that the Indian government discovered evidence linking Singham to a 501c3 (JEF) are linked to one another and to People’s Forum through large sums of money? Furthermore, the number of millionaires or billionaires with fortunes large enough to sustain tens of millions of dollars in donations over multiple years to tiny, obscure left institutions that stand in solidarity with the governments of China and Venezuela is simply not that large. Very few individuals aside from Singham have the means, the motive, and the opportunity to blow this kind of money on ineffectual organizations espousing ‘tankie‘ politics; after all, a minimum of $25,000 is required to even open an account with GSPF. While it’s true that funding by the governments of China, Venezuela, or Russia through GSPF is a possibility, states tend not to fund political projects they cannot directly control and certainly not to the tune of tens of millions of dollars a year.

What role PSL plays in all this is unclear, although the fact that both People’s Forum executive directors—Manolo De Los Santos and Claudia De La Cruz—are party members means that the forum will never stray far from the party line which means People’s Forum is effectively a PSL front, or at best a satellite organization. Hence why their insufferably long 10-hour livestream event on “China and the Left” contained zero discussion of strikes in China, the destruction of unions in Hong Kong by the CCP, genocide of Uyghurs, or the oppression of Tibetans.

Given PSL’s micro-management members’ activities, it’s safe to assume the party approves of the GSPF dark money donations that are the only reason People’s Forum exists. PSL’s inability to raise more than a few hundred thousand dollars per year through its 501c3, the Progress and Unity Fund, suggests that whoever is behind the massive GSPF donations to People’s Forum is probably not a dues-paying member.